There are already many weird words in Silicon Valley but we felt one important word was missing.

After living together AND working together, every day for more than one week. We needed to adopt some new tricks for better communication.
New word needed = Suquestion
– It’s when you already know the answer, but you pretend that you have a “suggestion”.

Other fun words:
Dogfooding – when you use your own product. You eat your own dog food.
Unicorpse – after being a unicorn and eventually died from starvation. 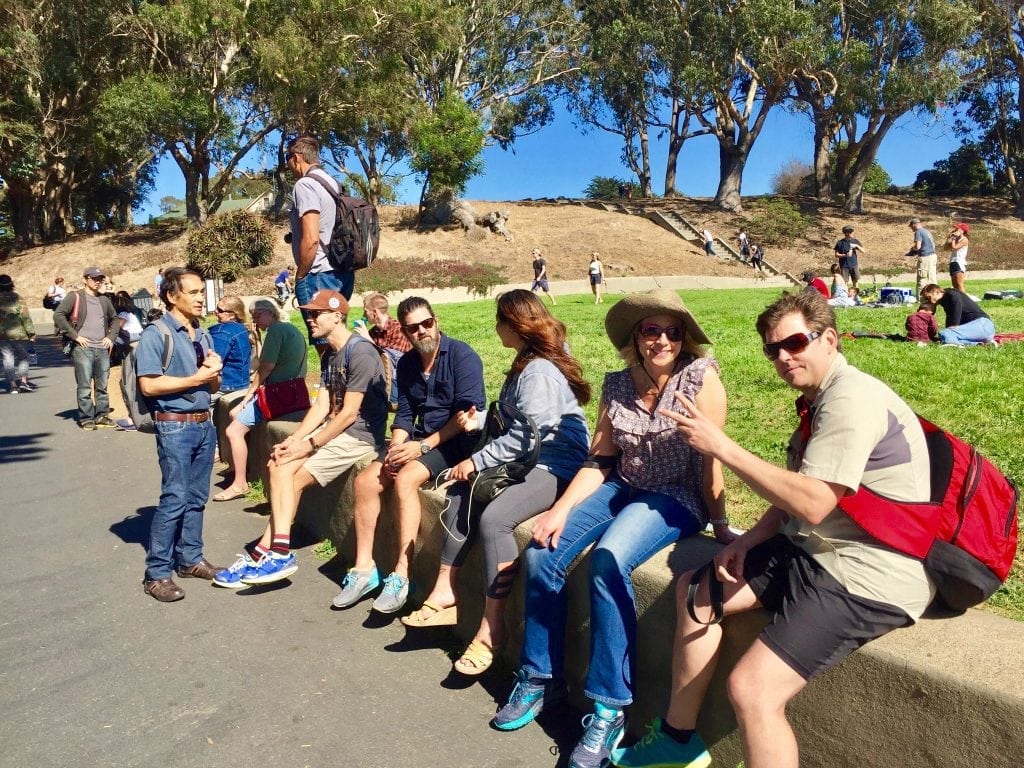 This blogpost will answer a lot of basic questions about Silicon Valley. For example income, costs, what’s happening, and related things. If you never visited you may appreciate it more than others.

What do you earn in San Francisco? What are the costs of living?
Can we afford to hire top talents in this location? With the information at hand it could also help decide if we should consider a future office in Silicon Valley? (or not).

I interviewed both native programmers and Swedish friends, who currently work in the area. I even found some more info online and the conclusions are the following:

How do you afford that?! You either live on the streets like many seem to do. Or you become a Fuzzy or a Techie. (Stanford slang for arts vs engineering)

– Facebook gives $100k/year straight out of college (to a top student).
– If you are wanted by one of the big employers like Facebook, Google, Über, Oracle or such, and have 8 years of experience, you could get a package “worth” $500k/year. (Package includes stocks, options, salaries, insurance, pension etc. It’s not plain salary).
-Whereas a more normal package would be around $350-400k/year.
What do you earn in Sweden doing the same things? I’d say around $100k/year… 1/4 th.

How’s the working environment?
We had to visit some big companies to find out, but we couldn’t get the time to travel around on weekdays. Luckily we got visitors! Rogers friends visited, and they did a good job. The house became a real hacker house with mattresses on all floors. And the young visitors also made us feel young.
(The average age in our house went down from 41 to 33. My age is 36. The amount of people went up from 4 to 7. -> If you send me the correct age of all of us you win an iPhone 😉

The young visitors went to the Pinterest head office. They were amazed by the food court inside. They have their own chefs, free food, free drinks and even a candy shop with free candy. Everything you need right inside the office! Got problems with your screen? Call IT and get a new screen instantly – no questions asked. They even stock brand new macbook pro’s, just in case.

Why do Facebook and Google pay these crazy amounts? Aren’t they supposed to be attractive anyway?
Problem: Their offices aren’t central. The local traffic is no fun to ride. People just don’t want to commute. San Francisco city is fun. One hour outside the city is no fun.
Solution: Free private bus lines for employees. Hop into a nice and fresh bus with wifi. You can work on your way to work! There are several lines from many locations.

Vacations?
Nah. Well. Some startups offer “as much as you want”, but it doesn’t work in reality. The managers still believe that you need to catch up often and keep up to date. They don’t want a situation where you are away from work for weeks and miss all the action. Because when you are back in business you fight with catching up for weeks, before you can be productive again.

What is Silicon Valley? Except from a place. Why should you ever go there? Why can’t you just do your thing and forget about the place?

I normally try to understand by reading the history so let’s start with… Columbus..? Too early?
Let’s start with something more fun. Stanford. A University. Hundreds of years old. It was founded by…Hey, let’s take a shortcut.

There were a bunch of students who attended the same evening courses. Their last names: Hewlett and Packard. They met several times over the years while studying, and the results are part of PC history. https://www.smecc.org/hewlett-packard,_the_early_years.htm

This university plays an important role for the community. Not only because companies use their services to innovate. But because it’s a meeting place for like minded people.

How important is it to meet regularly? You can also find answers from interviews with Steve Jobs and Bill Gates, who met several times during their 30 years as both partners and competitors https://everystevejobsvideo.com/steve-jobs-bill-gates-and-microsoft-its-complicated/

Think of some idea you just had. How was this idea triggered? Probably thanks to several smaller things you recognised before, and suddenly you put all of it together and have a new solution at hand. This is what happened to Jobs when he visited another company and found the GUI and the mouse to be interesting.
https://web.stanford.edu/dept/SUL/sites/mac/parc.html
(We all know the mouse and the GUI was a Swedish invention originally, but that’s not the topic of this story).

All of these stories are popular and they all share something in common: Nice people who met while in the Valley. Today people continue to meet and they probably won’t stop. It’s just people.
Today Stanford is studying innovation, teaching innovation and use innovation in their everyday lives. Like many universities. It’s just a place.

Ok. What’s the deal? We have people and a place.
Let’s add some more elements into the mix.

What about startups?
What about the program “TINC”? Our startup accelerator program. We participate in workshops, events, and mentor meetings. We found there’s a genuine a special interest for startups.

I hear many people say:

And I start to believe it’s true!

Why?
I went to a private party and found some interesting books in the bookshelves. I asked what books they found most interesting and best fit for a startup. I didn’t expect more than one title as a general recommendation. It took only 30 seconds and then I got a lineup of books. “This book first, then this, and after this book you will need to follow up with this one, because it’s filling the gaps between your first 10 customers and the next 50”.

What about the culture of the Bay Area people?
– I’d say: Open minded with an open calendar.

It’s standard to ask about your profession “what do you do” and expect a quick pitch back. Sometimes I wonder if they really care? They care about the networking for sure! If you do something, and they know someone, that’s good. Because then you could be introduced!

You can get to a meeting with a top manager just by asking. It would never happen in Sweden (too busy, sorry). In the Valley, you won’t be questioned why you want to meet. It’s an open door community. Important! If you meet without a clear agenda, and without being able to answer “whats in it for me in return” then you won’t get another meeting. The whole city works accordingly, and continues to work like this, if everyone is in it. And they are.

So what’s special? A quick recap what we got so far:

What else can be found in massive quantities?
– software companies
– meetups
– money
– marijuana?
– events

What’s missing?
Some of the biggest companies in the world. The centre of software innovation and development. All like minded, well educated, and open minded…. Aha! I know! Let’s put them all in the same city and make sure they can meet within 15 minutes with a lyft/über taxi, for a nice deal of $10, and you have a well functioning engine.

AND THAT’S NOT ALL!

Add the money flow, the capitalism, fierce competition and loads of co-working spaces and accelerators. The strongest will survive. If the strongest survive in such world, they are likely to survive in other worlds too. Thus creating a lot of global success companies the past decades.

Add the job rotation. You can give notice the same day, and legally quit your job just like that. In practice it’s 2 weeks notice. You can quit any time. Everybody screams for talented people. It’s not hard to get a new job. Keep changing jobs, get more ideas, find more opportunities.

I just read another blog which stated “the end of the Valley”. They claimed it’s too expensive, too hard to find people, and other cities and countries are trying to outcompete the Valley. One of the concerns was that the startup model is old and outdated. They wrote that it’s too hard to create the next big company now. The ones we got are no longer being produced. Startups get less seed money, unicorns are increasingly overvalued and are not creating real value and can’t survive without VC money.

You might think it’s a hype. A fake world in a bubble. Could be…
Hm.

My key learning from the first weeks, which I already knew, but didn’t realise: Data is taking over the world.

AI has been around since 1950 but it didn’t have enough data to play with until now. The companies in Silicon Valley produce data. A wast amount of data. Can you find another place in the world where you create and collect more data? Probably not.

And who are most likely to create new ideas around all that data?

A) Some crazy people in a bubble who takes time to meet every day with anyone, to get injected and inspired with loads of energy from startups and entrepreneurs?

B) Some random boss in Sweden who refuse to meet companies just because of a busy calendar?

C) The guy who wrote the blog post complaining about ‘old startup models’?

Part of the problem in option B) is not only because the large companies are hard to get into with new ideas. It might also be because of the lousy introductions the startups produce.

Yes I am talking about the pitch!
And our pitch was horrible when we entered the TINC program. Sorry, it was.

I remember the first mentor meeting where we pitched and got a palmface reaction. Doh!
I am aware that our pitch was vague. We are still practicing and getting better. Since we came to our program we have been able to pitch in average 3-4 times per day.

Of course this is one of the problems we, and a lot of other companies, have. We fail to get the meetings with other companies because we can’t properly introduce ourselves. I guess babies learn to pitch in the valley 😉

A new insurance company collect ALL types of data. Not only your income, gender, age, but also how you type. If you spell correct. How quick you fill the webform on their webpage. What you like on Facebook.
– And this insurance company have a better predictability of the insurance risk than anyone.
They are learning about you and your risk behaviours from your data. They can give you a perfect price on your insurance, at a lower cost than traditional companies.

Über collects all data it can. Every driver use a smartphone with the GPS APP. The movement sensors reports where the roads are good or bad. This data is sold to governments and they learn from it.

I could go on giving more examples, but you already know what data can do. Google, Facebook, they all collect it.
This is only a fraction of all new startups that are already creating new ideas around data. There are more examples and this is just the beginning of the new data driven journey. I expect Silicon Valley to play a key role for a long future.

But that’s just my personal opinion! Please make a visit and get your own 🙂

PS. This is not a banner from Dominos Pizza. It’s my order and I love watching the current status while waiting for home delivery DS.

Apply for a free trial